Saturday night 170 people came together to celebrate the opening night of the Lakeport Opera House. For so many reasons, the unveiling of this remarkable new entertainment venue made an indelible first impression.

The Opera House harkens back to the 1940s era Copacabana with a modern flare. The redesigned theater area was renovated using the existing bones of the original building.

“There are a variety of live music venues in the area for people to choose from, so we wanted to create a unique entertainment experience,” Opera House Director Tim James Everett said as he showed us around the theater before the doors opened. “We wanted to create a more cosmopolitan vibe for the space” 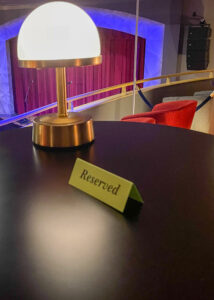 Cocktail tables line the perimeter of the theater. There are end tables adjacent to most of the seats for patrons to set their drinks while they enjoy the show. The overstuffed designer chairs in the front row ensure the best seats in the house are also the most comfortable.

The space is intimate with the theatre configured for seating 170 guests. I guarantee there isn’t a bad seat in the house, I tried to find one, and couldn’t do it.

I love to crank the volume up to “11” so I can feel the music as much as hear it. The band moved significant air through the Opera House state-of-the-art sound system, and the crystal clear tone and theater acoustics generated an exceptional sound as they ripped through a 90-plus minute set of blazing classic rock favorites. Thankfully, they didn’t play a single power ballad the entire evening. When lead guitarist, and Laconia native, Mike Smith launched into the Mitch Ryder and the Detroit Wheels “Devil With a Blue Dress” medley a dance party broke out in the mezzanine. Shortly after, “I Know A Little” by Lynyrd Skynyrd brought the boogie to the rest of us on the main floor.

Mike Smith also shared the love for the Opera House posting on Facebook… “You guys knocked it out of the park! Probably one of the best sounding rooms from the stage that I’ve ever seen (heard) and you guys addressed every detail to perfection!” 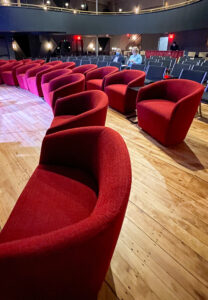 From the original artwork in the two-story bar and lobby areas to light fixtures and restrooms (which deserve a post of their own) the attention to detail is apparent at every turn. Working with Dallas-based designer Stephanie Moore Hager, the Everett brothers have crafted an air of sophisticated elegance that’s not stuffy.

Sure, there are a number of music and entertainment venues in the region offering amenities like food and beverage service. Think the Tupelo Music Hall in Londonderry, The Flying Monkey in Plymouth, or the State Theater in Portland ME. But the attention given to every detail, and the premium placed on providing excellent service, the Lakeport Opera House elevates the live entertainment experience to a whole new level.

“All in all I thought it was a home run,” Tim told me the day after the opening night show. “I received 50 texts and messages about how amazing the experience was.”

“Obviously it’s natural to see some things to improve on,” he added, “which is exciting as well because the experience will just keep getting better.”

You only get one chance to make a first impression and opening night left us extremely impressed.

For that, opening night at the Lakeport Opera House earns a standing ovation.